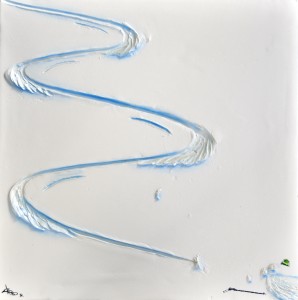 Has this ever happened to you? I know it sure has to me! The skier’s yardsale, mishap, slip up, bail or wipeout! This layout was floating in my head for some time, being triggered again after each ‘mishap’ I would have on the hill, mostly after a deep snowfall. I believe that the original inspiration comes from the best yardsale I have ever seen, produced by my very own father, at Silver Star resort, BC, Canada.

It was a christmas trip where my brothers, my father and I stayed at the resort and had a fantastic time exploring the hill. On the back side of the mountain are an amazing set of runs, which are very quiet as there is a trek over a flat section to get to them. One run, directly under the lift is a nice steep black, which at that time was a little icy. The 4 of us threw ourselves down, Dad not being too sure but game for keeping up with us (we had a habit of doing that…). After about half the run, Dad lost an edge and went down, losing one ski then a pole. Now, his initial reaction was that he would slow down, although the hill and his snow pants had a better idea. He accelerated and began shedding more and more gear in his attempts to slow down, all in full display of the chairlift! For about 10 minutes afterwards, waiting at the bottom of the lift, gear was graciously returned to our father. Obviously, my brothers and I were showing our deepest concern for him by rolling about laughing and joking. Sorry Dad, it was kinda funny to watch, especially as you came out unscathed!

This canvas is 24″ by 24″ with a sculpted plaster base with airbrushed acrylic detailing. The hat is modelled on one from my own wardrobe.